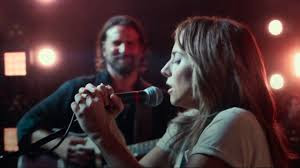 Wacko Wizard was “moved” to see “A Star Is Born”. The 3rd version of it. He had not seen the first two versions.

Drunkard drug addict male super rock star discovers talented young female singing, acting and dancing in a cabaret and woos her to be all she can be, just do it, hold nothing of herself back, give the audience her full self, even if the audience doesn’t want her full self; and he takes her onstage with him at his next concert and she is an immediate hit, and they fall in love and eventually get married; while she has drawn the attention of a top-shelf British talent music producer, who tells her she can go much higher and he can get her there, but she needs to dye her natural brown hair to platinum, and she says that’s not her, so she dyes it to fake red, which also isn’t her and it grosses me out, because I don’t like the color and she goes against giving the audience who she really is; 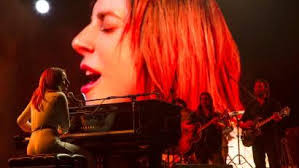 and she indeed takes off and receives a Grammy for best rising star, and hubby goes in the booze and drug tank and makes an ass out of himself at the Grammy ceremony, and later he tells her how ugly she is, after she tells him how badly he had messed up at the Grammy ceremony; and he goes into rehab and has soul search and comes out and makes amends with wife still in love with him; and top-shelf agent-producer reams hubby out, and tells Grammy winner she can’t do shows with hubby, and Grammy winner tells top-shelf agent-producer that either hubby appears with her, or no deal; and she is to do another show and hubby says he will be there, but instead he kills himself while she is doing show alone wondering where he is, and nobody lives happily every after; but she sings his eulogy, a song he had written for her, before a packed house someone else arranged, and hubby’s older brother tells her it was nobody’s fault but hubby’s.

Wonder how “A Star War Born” went over at Tropic Cinema in that tiny fishing village with a big drinking and drug problem on the asteroid near the westerly edge of the Bermuda Triangle?

Wonder if AA and NA chapter houses flocked to see “A Star is Born”?

Wonder if a reason I saw it was my parents were alcoholics, and a woman I love dearly is an alcoholic and also a seer?

She says she drinks because she doesn’t like what the spirit world shows her in dreams and visions about other people and places. I tell her I think that might be part of it, but she needs to look deeper.

I’ve been watching the angels, who connected that anomaly lady with anomaly me several years ago, trying different ways to coax her to give up her drinking, and smoking cigarettes, too.

She knows I cannot live with someone who drinks or smokes.

She reports ongoing sensual dreams about us that she never heard of another woman having about a man.

When people ask me why I took up with her?, I say I was bored and she showed up and made my life a lot more interesting.

When people ask me why I still hang in there with her?, I say, well, I love her, and I don’t know many people who are in conscious contact with the other realms and I get lonely.

And, I see she is a star waiting to be born. Her soul wants it. But does she?

IN THE BIG SCHEME, HUMANITY IS A TINY PEANUT GALLERY, BUT STILL WE ARE A DOT ON A STRAND ON THE GREAT WEB THE HOPIS CALLED SPIDER WOMAN, AND IN SOME WAY WHAT WE DO PLUNKS THE STRAND ON WHICH WE PERCH, OR FALL FROM, AND THAT EFFECTS THE ENTIRE WEB SOMEHOW OR ANOTHER, AND THE ECHO REVERBERATES BACK TO US. SAYING IT ANOTHER WAY, WHAT WE DO HERE TODAY ECHOS IN ETERNITY.