Has America become a cult nation?

My homeless lady friend is blond and was born a seer. I met her in late 2015. The soul drawing of her drew itself through me maybe in 2004. She  told me that, when she was a young woman, she was taught several bird-feather shaman rituals by an elder Native American shaman. Not long ago, she told me that she was shown me in a dream when she was young woman, and was told that some day she would meet me.

Three days ago, she reported a dream of the night before, in which she saw a lot of men on horseback, wearing knightly armor, armed with swords, bows and arrows, and spears or lances, charging across somewhere on the plains toward a castle in which a bad man was hold up. In my dreams, horses usually represent politics/candidates.

The day after my homeless lady friend’s dream of the knightly horsemen, Psycho Psychic told me of a dream in which her left hand was severely cut, as if intentionally, and a healer fellow put ointment on it, which healed it.

Psycho Psychic told me of another dream she had twice, about a very tall man, at least 7 feet, in a white suit, who came to her in the cottage by the sea, about which she dreams most nights. He told her he was trying to get in touch with me by telephone regarding Young Prophet, but he had not been able to get through to me. Psycho Psychic said she wondered if the man in the white suit was Archangel Michael? 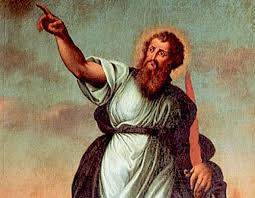 Young Prophet often reports to me dreams and waking visions of Michael, and other angels, visiting him and telling him things about himself, me and other people, which aren’t always particularly pretty, but are informative. Michael has been with me since early 1987. In some religious art, Michael has wings and carries a large sword.

Twice in the past few days, Young Prophet reported to me that someone, who had his cell phone number, used a sim card and a cell phone to try to get into his smart phone, and his cell provider caught it and shut down his cell service to protect him and his phone. When Young Prophet’s cell service was down, and when it was up, I was having trouble reaching him. And, I was having trouble sifting through and getting a sense of what the tall man in the white suit wanted  to tell me.

Hold all those thoughts.

Although, it has looked to me for some time that America, with its many different religious, social and political sects, has become a cult nation, yesterday, I learned that Americans and the whole wide world have FOX News to thank for  the emperor has no clothes video below of President Trump at a recent MAGA rally. Click on the FOX News image/link and watch one brave man strip Trump naked with a photo of Trump and Jerry Epstein. Then, as the man is escorted out of the MAGA rally, at Trump’s command, the MAGAs go to chanting, “USA, USA!” As if they themselves have just won the ladies soccer World Cup, which the USA ladies team did just a few days ago, anchored by a woman soccer phenomenon, who openly slams Trump and takes a knee during the National Anthem. The US ladies soccer team won the cup twice in a row, doing their part to make America great again, while Trump and his MAGAs in the FOX News video below seem bent on ignoring what does not please them and applauding themselves. Do I think the ladies soccer team is a message from God to Trump and his MAGAs? Does the sun rise in the morning?

YOUTUBE.COM
Trump Ejects Protester Who Holds Up Picture Of Donald With Jeffrey Epstein

Yesterday, this below arrived from Psycho Psychic, who said she had found it while cleaning out old stuff in her home.

Koresh and his cult in Waco, on the Texas plains,  made world history in April 1993, when their compound was assaulted by the FBI and U.S. Military Forces. Koresh and many of his followers were killed. Attorney General Janet Reno ordered the attack and caught hell. I told Psycho Psychic, who voted for Trump, that it looked to me that Trump shares similar sex tastes with Epstein and Koresh.

Also not  by chance, which does not exist in the real worlds, Young Prophet told me yesterday, that he once talked with a woman who was one of Koresh’s young wives in the cult. I later found this online:
https://abcnews.go.com/…/wives-waco-women-describe…

I told Young Prophet that I had a lady radio talk show host amiga in Salt Lake City.  From time to time she interviewed me on her show. The Salt Lake Mormons and conservative Christians who called in didn’t seem to care for my take on much of anything religious.

One day when I was scheduled to be on my amiga’s show, she called around breakfast time to ask if I had heard the news about Waco? Yes, I said. She asked if I still wanted to do the interview? Sure, I said. I’ll pretend to be the Devil, in Waco. She said she would promo that on the air before the show.

She called at the appointed time and asked if this was the Devil she was speaking to in Waco, Texas? I said, yes. Why was I in Waco? Well, I said, I had to interrupt my vacation to check out what had happened in Waco. I lived on Maui, watching watching pretty women in bikinis on beaches, because people were doing my work for me.

One woman caller asked why I had a southern accent? I said, because I’m in Waco, Texas.

It was a WILD hour on my friend’s talk show. She called me afterward, laughing her ass off. We laughed our asses off together. But it wasn’t funny. Something horrible had happened. Koresh was a monster. The FBI agents and Reno and the US Government were monsters.

The FOX News video above speaks for itself. If I were running candidate forums in 2020, I would run that video, and then ask Trump for his comments. I would ask Trump if he thought God, or an angel, might have sent that brave man to the MAGA rally? I would have told Trump that I would bet my life and soul that is what happened.

Wacko Wizard, over and out

One thought on “Has America become a cult nation?”